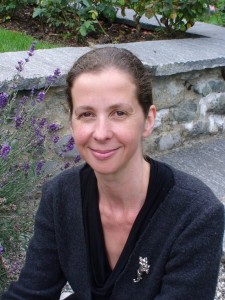 Grace was born in London in 1968, she is a poet and writer whose work concerns itself with the intertwining of people and place. Fired and inspired by a deep love of the natural world, she has spent the last twenty-five years living as an organic smallholder in rural Tipperary. Her second collection of poetry Fur (Dedalus Press, autumn 2015), is a meditation on the being human and being animal in our era of environmental crisis. She is presently undertaking an informal exploration on the nature of depression and pre-traumatic-stress-disorder in eco-activists and those concerned with environmental destruction.
Grace’s first book, Gyrfalcon (2002), a novel for children, won the Eilis Dillon Best Newcomer Bisto Award, and was an International White Ravens’ Choice. Other publications for children include Ice-Dreams (2008) and One World, Our World (2009). Her debut poetry collection, When God Has Been Called Away to Greater Things (Dedalus Press, 2010) won the 2011 Rupert and Eithne Strong Best First Collection Award, was short-listed for the London Fringe Festival New Poetry Award and has recently been translated into Italian. Fur will be published in the autumn of 2015.