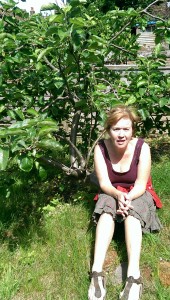 Fi was born in Australia in 1960 and came to the UK in 1982.  From a young age she’s had a great love of the sea and wild landscapes, which remains a constant companion and source of inspiration today – influencing her love of painting, music and poetry.

Born to an Irish mother who had immigrated to Australia at age 17, she became aware of the deep psychological impact of exile and discrimination.

From an early age journeys between Ireland and Australia began to inform her ongoing search for home and cultural identity. This led to her training as an  Integrative Arts Psychotherapist in London where she been practicing since 2003. She has maintained a private practice as well as working within the NHS and various private sector organisations.

Central to her work is an engagement with the creative process using a diverse range of art mediums with an emphasis on Jungian Sandtray Therapy.  Fi is also interested in exploring the transpersonal and how psyche communicates to us through the images and art forms we create using objects and materials found in nature.